Incident Investigation is a powerful method of identifying the causes as well as the sequence of events that lead to an unsafe condition. If the condition of insecurity has developed in a scenario with an impact on the people, the environment, the equipment or the company’s reputation, it is called an “accident”. If this scenario has only generated the potential to cause harm, it is called an “incident”.

Consequences greater than those manifested may be hidden in an “incident” or “near-miss”, which is why it is preferred to refer to it as incidents’ investigation and not accidents. 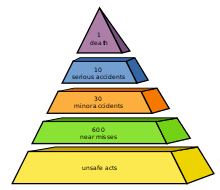 It is acknowledged that behind each fatality there are ten (10) severe incidents, thirty (30) minor and six hundred (600) “almost accidents”. At the base of the pyramid are the so-called unsafe acts or unsafe conditions that are, in fact, the origin of incidental scenarios, often in the form of “hidden causes”.

The best way to avoid more severe events is preventing and mitigating these minor cases.